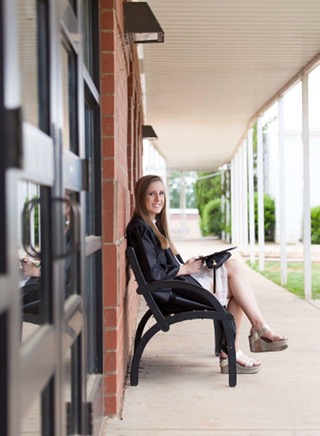 It is hard for me to believe that my oldest daughter Maggie is counted among those receiving diplomas this year.  Seems like just yesterday I was feeding her strained carrots and making sure her bottle was the right temp.  A few weeks ago I sat down and penned a letter to Maggie.  I laid that letter on her bed last night.  It was simply a letter from the heart of a Christian father to a daughter entering the real world.  I decided that I would take out the personal parts of the letter and, in a more general way, share the main points with other graduates.  (Not that I am assuming that a graduate would actually take time to read my article, but maybe a parent will read it to them.)  Oh how I wish someone would have told me these things before entering my freshman year of college!

“Timothy, my son, here are my instructions for you, based on the prophetic words spoken about you earlier. May they help you fight well in the Lord’s battles. Cling to your faith in Christ, and keep your conscience clear. For some people have deliberately violated their consciences; as a result, their faith has been shipwrecked.”  1 Timothy 1: 18-19

In 1 Timothy, Paul is writing these words to a young man who would be in the midst of the Lord’s battles.  He is preparing him for the things he will encounter in serving Christ and his church.  Timothy would encounter strong resistance and false doctrines.  Even Timothy’s battles may not have been as strong as the ones the class of 2016 will face.

Graduate,  you are preparing to enter a world that is increasingly antagonistic toward Christians.

We are losing large numbers of your generation to a worldview that is opposed to traditional biblical values.  Researcher George Barna conducted one of the largest research projects in relation to generational disengagement from the church.  He interviewed 22,000 adults and over 2,000 teens in 25 separate surveys. His finds are disturbing.  “Six out of ten 20 somethings who were involved in a church during their teen years are already gone.”  These teens were very involved in church youth groups, as children they attended VBS and sang in choirs, they participated in youth Christian clubs at school.  But by the time they reached 20 years of age, nearly 2/3 of them had not only left the church, but they have also stopped reading the bible, praying or engaging spiritually at any level.  Barna calls them “spiritually disengaged.”  Only 20% of teens who were spiritually active in high school maintain that level of commitment once they graduate.  (Barna Research Online, “Teenagers Embrace Religion but Aren’t Excited about Christianity,” Barna.org)

Dr. Ken Hamm also did similar research and his findings are even more sobering, “Of all the 20-29 year old we studied who attended church regularly as a teen only 11% were still going to church while attending college.” (From the book, “Already Gone” by Ken Hamm & Britt Beemer: Master books, Green Forest, AR, 2009).  I pray fervently that you will not become one of these statistics.  Don’t be like so many others who, after high school, who neglect the most important for the non essentials.  Your relationship with Christ is the cornerstone of your being and existence.  If you neglect Him, you will quickly lose your sense of identity.

In 1 Timothy 1:19, Paul gives 2 clear mandates for young Timothy:  “Always cling tightly to your faith in Christ and keep your conscience clear.”  If we neglect those two mandates we threaten to “shipwreck our faith”.  As already indicated too many young people’s faith will eventually be lost at sea, shipwrecked and wayward.

I charge you to cling tightly.   “Cling tightly to your faith in Christ.” V. 19a. The words that Paul uses here are very direct.  “Cling tightly” or take a strong grip.  The original language of this verse means to take a grip and don’t ever let go. Be stubbornly strong with your faith in Christ Jesus.  Three different times in this letter to Timothy Paul gives similar encouragement.  In 6:12 he urges him to “fight the good fight for what we believe and hold tightly to eternal life.”   The things that await you have the potential of loosening your grip with the Father’s hand.  Don’t allow it.   Your faith will be challenged by a world that is ambivalent and at times obstinate toward a Biblical world view.  You may even set under the teaching of professors who ascribe to a human centered philosophy and hedonistic ideologies.  You may be taught that the creationism is a short sighted myth which is only believed by small minded people.  You may be taught that there are no moral absolutes where right is right and wrong is wrong.  Anything goes in our 2016 American culture.  Some will say that you only need to look inside yourself to determine what is best for you.  They will tell you that the Bible is only a book of antiquated literature which at best gives us historical information about faraway lands and ancient people that has no real relevance to your life now.  They will tell you that no one religion is right and true.  All belief systems have some measure of truth and that all religions are leading to the same place.  Some may teach you that Jesus Christ was a historical figure, a Jewish teacher and prophet who founded a religion 2,000 years ago.

But I believe that you know better.

And remember that the grip works both ways.  Your grip may slip, but his grip of grace is strong enough the keep you for all eternity.  In the coming year you will meet people who will try to loosen your grip of faith in Christ.  I guarantee that.  They will even say that they are trying to open your mind to new ideas but don’t let them.  Hold on tightly to him just as he is holding on tightly to you.

I charge you to live rightly. Paul says to “always keep your conscience clear” V.19b.  The word “conscience” comes from two Greek words meaning “To know” and “Together”.  Your conscience draws together that which you morally know is right and what you spiritually know is right so your spiritual conviction and moral conviction are combined and galvanized never to be separated.  Your life will ultimately be directed by the right or wrong choices you make.  To have a clear conscience means that you consistently do what you instinctively know is rightly enabled through the ministry of the Holy Spirit who lives in you.

When faced with a decision, don’t look around for help, look up.  “But remember that the temptations that come into your life are no different from what others experience.  And God is faithful.  He will keep the temptation from becoming so strong that you can’t stand up against it.  When you are tempted, he will show you a way out so that you will not give in to it.” 1 Corinthians 10:13.

When I speak to people my age who have wrecked their lives they consistently tell me the same thing.  It all started when they were 18-20 years old.  After high school they chose to find their own way in this world and they left the things behind that they knew were right.  Their choices wrecked their life.

Graduate, God is calling you to a life of Holy living.  There are over 7,000 promises in the Scriptures that God has made to us, but many of them are negated due to an unclear conscience.  God has this incredibly abundant life for you and it is all right in front of you.  However, if you choose your own way, make unholy decisions and follow the ungodly ways of this world you will miss out on the greatest adventure of your life, the walk of faith.  Don’t miss this adventure.  The world will try to allure you with flashy things that promise fulfillment but will leave you empty.   Keep your eyes focused on Jesus, make consistent choices that honor Him.

I charge you to impact greatly. “But you Timothy, belong to God; so run from all evil things, and follow what is right and good.  Pursue a godly life, along with faith, love, perseverance, and gentleness.  Fight the good fight for what we believe.” 1 Timothy 6: 11-12.

How will you impact your world?  Don’t live only for you, make an eternal impact for the glory of Jesus Christ.  We need your generation to make a lasting impact on our culture.  We need you to be the light in a dark place.  The world doesn’t just need you, they need Jesus in you.   If they remember your name that is good, but if they remember his name because of you, that is even better.  If you want to make a lasting impact do what Paul encourages young Timothy to do:  Run from evil, follow what is good, pursue godliness and fight the good fight of faith.

We need a radical generation of Jesus loving, Bible believing, committed young people. I believe this generation could be the greatest missionary force in the history of our country.

Don’t become a statistic.  Don’t be like 2/3 of people your age who become spiritually disengaged.  It is my prayer that one day when you are old, you will have the pleasure of looking back at your life without regrets.  When the final page of your life is written may the last page of that book be signed by Jesus himself.